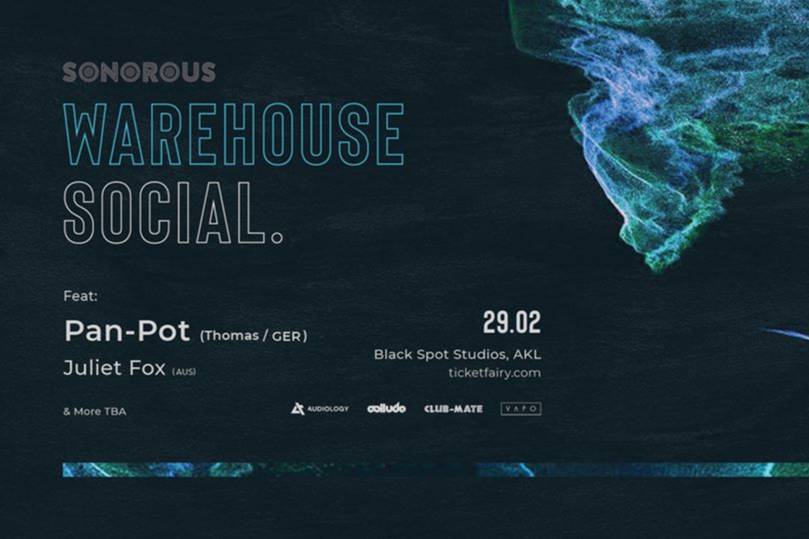 Sonorous presents.. WAREHOUSE SOCIAL 2.0 Featuring international talent.. Pan-Pot, Juliet Fox + more TBA. Sonorous a deep, resonant sound. A boutique scenic adventure located just an hour north of Auckland which returns for its second year, designed to cater to true house and techno enthusiasts. Featuring the very best in international talent and a careful selection of locals, it’s a journey that is rarely experienced on these shores thus far featuring acts. Grab those close to you, pencil in the date, and wait for an announcement that’ll cement this in your diary for good. They bringing you the second addition of their warehouse focused dance event, after a sold out debut. This time they have secured the best new industrial space that Auckland city has to offer: Black Spot Studios.

PAN-POT
A pan-pot is a simple, workday knob, given to side-to-side flip-flopping and not much else. Pan-Pot, on the other hand, are a brilliant multi-dimensional Berlin duo currently twisting house and techno fans into rapturous fits. In just a few short years, Pan-Pot comprised of Tassilo Ippenberger and Thomas Benedix have developed a dominate presence amongst the top tier of electronic dance music, with an ascension paralleling the rise of their native label, mobilee records. After booking Anja Schneider for an infamously ill-fated party in 2005, the duo established a connection with Schneider’s then recently formed imprint and within weeks had released the Popy and Caste EP on mobilee their first release and the label’s second. Graduates of Berlin’s SAE, their initial musical efforts placed a primacy on integrating electronic experimentation with minimal stylings while simultaneously establishing the ominous, murky sounds that have since become synonymous with their name. The next few years saw the release of a steady stream of original tracks and remixes on both mobilee and Einmaleins, each demonstrating the duo’s commitment to precise, undulating and kinetic grooves accompanied by a steady expansion of their sonic palate.

JULIET FOX
Juliet’s presence on the Techno scene cannot be ignored, her rise has been swift and relentless with countless production success alongside her increasing demand for DJ performances gracing some of the most famous stages and DJ booths across the globe. Collaborating last year with Ramiro Lopez resulted in two Techno anthems with ‘Twisted’ released on Ramiro’s own ODD imprint and ‘Come Closer’ released via the mighty Drumcode being one of Adam Beyer’s stand out tracks in his DJ sets. With 2017 being a one of the biggest years in her career, it also saw Juliet travel across Asia on an extensive tour taking in Thailand, South Korea, China, Singapore & Malaysia alongside performances in her home city of Berlin and across Germany, Finland, South Africa, Australia, the USA, Canada & more.