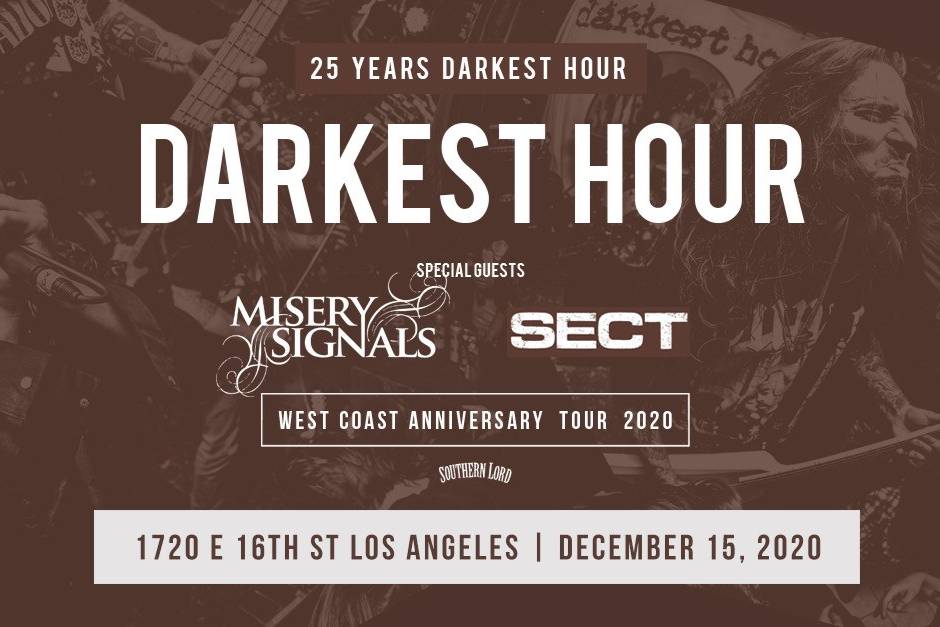 Due to closures because of Covid-19, this event has been rescheduled and will now take place on December 15, 2020. Darkest Hour 25 Year Anniversary Tour - Feat. the return of Misery Signals!!!!!

DARKEST HOUR
DARKEST HOUR’s highly acclaimed, self-titled eighth full-length album is now also the highest Billboard debut chart positioning of their storied career. The Washington, DC-based band’s first for new label Sumerian Records debuted at #94 on the Billboard Top 200 charts today. It showcases each individual pushing themselves outside of their comfort zone implementing more clean vocals with expanded dynamic melodies rooted firmly in thrash metal with bombastic shredding guitar solos. Mike Schleibaum states: Along with a new rhythm section, we also chose a very different route for the album’s production this time around. While we have worked with well known producers in the past, we chose a much younger and more local producer in Taylor Larson. He recently gained a lot of attention after his work with Periphery and after spending some time working with him we knew he was the man for the job. Tasked with making the most sonically modern, melodic and diverse DARKEST HOUT album yet, Taylor looked the challenge right in the eyes. He uncompromising approach to pushing us as songwriters and musicians was unrivaled. It took a young heart with a fresh perspective to get this album moving in the right direction and Taylor was the man in the driver’s seat.