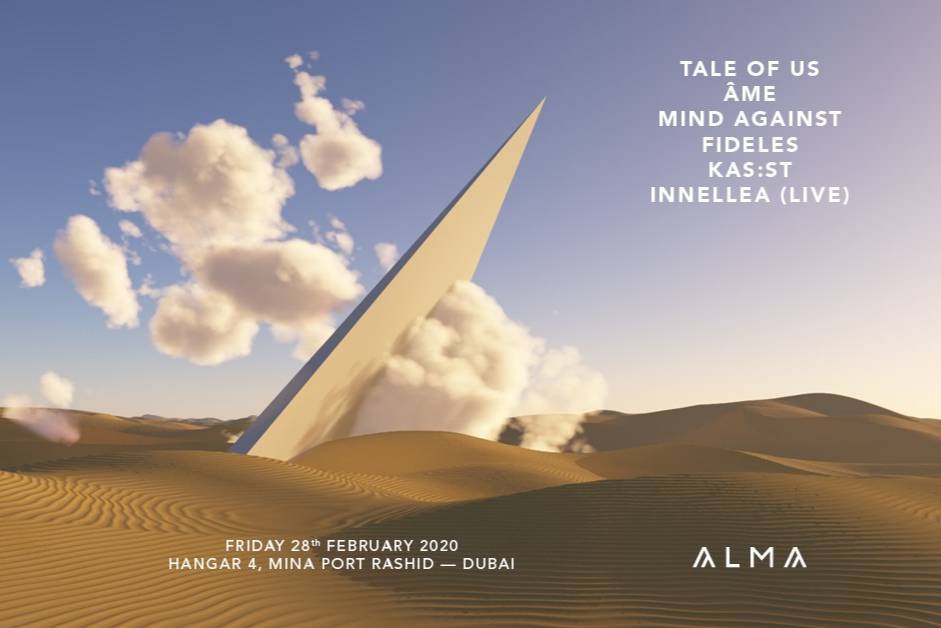 Afterlife arrives in Dubai for the first time on Friday, February 28. Tale Of Us will host their first Afterlife event in the United Arab Emirates at Dubai’s newest, industrial warehouse location, Hangar 4. Joining the duo for this special voyage will be Âme for a DJ set, the unique sound of Mind Against, Afterlife regulars Fideles, ‘Hold Me To The Light’ duo Kas:st and a live set from Innellea. With the signature Afterlife visual production and the venue’s monumental space, Afterlife Dubai is set to be an unmissable experience.

TALE OF US
This tale dawns in Milan, where Karm and Matteo met at a very young age. The Lombardic capital will turn out to be the preface of their success story as they now reside in Berlin, their inspirational verge. Born in Toronto, Karm moved to Italy when he was just a child. It was at the tender age of ten when his parents took him to a classical concert that he felt “true love at first sight.” He dreamed of becoming a pianist but eventually settled for law school. Matteo left New York when he was just a year old and spent his late teens booking techno artists for his loft parties. After Karm quit law school, the pair met while studying music production at the SAE Institute. There, they bonded over a mutual love for music and discovered their complementary talents, thus marking the origin of Tale Of Us.

DJ AMEN
DJ Amen is one of the West Coast's hottest DJ's. He started as one of the first mixers on a local Hip-Hop station where he grew up in the Northern Bay Area and can now be heard on Real 92.3 in Los Angeles 7 days a week as well as on San Francisco's 106KMEL. As if that's not enough, you can also catch him rocking the hottest clubs, concerts, stadiums and arenas in California as an official in game DJ for the San Francisco 49ers and Sacramento Kings. With a knack for discovering hot new talent, building influential brands and always being on the cutting edge, he has been instrumental in the resurgence of West Coast Hip-Hop in recent years. His most successful collaboration to date is his "BLESSED" clothing line which has been spotted on the likes of Diddy, Future, Dj Khaled, 50 Cent and more.