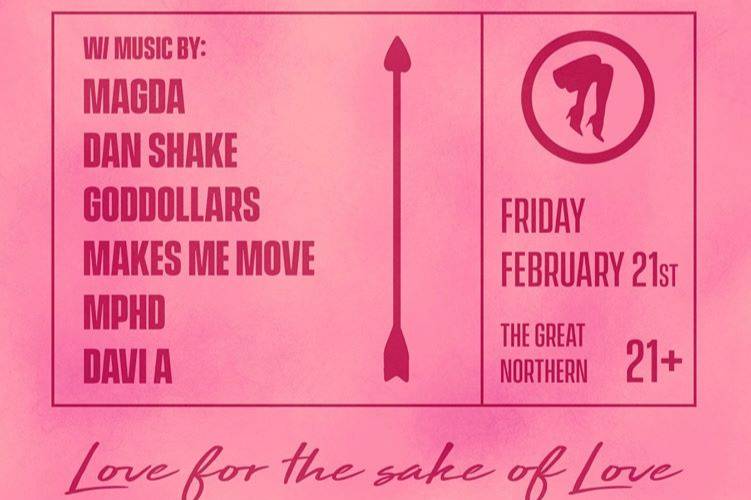 As seasons change to love's next page, the heart still moves for what remains. Yet still we move, led by the moon, to the warm caress of the sweetest pain. On February 21st in San Francisco love returns to the club so dance like no one is watching.

MAGDA
Magda's realm as an artist spans far beyond the typical role of DJ and producer. With an open mind, Magda will try her hand at whatever feels right from music technology collaborations and events to producing premium Tequila creating a truly unique, multifaceted expression of herself. Born in Poland and raised in Detroit, Magda discovered beauty and inspiration in raw urban landscape. In 1998, she joined Minus and began touring as Richie Hawtin's opening DJ. In 2006, Magda established the Items & Things label and booking agency with Troy Pierce and Marc Houle. In 2017, she launched the Perm event series in Berlin.

DAN SHAKE
For the last few years, Dan has been stamping his mark on dance-floors across the globe, both with his distinctive funk touched productions, and his expertise in working a crowd. The London-based artist has done what no other has done before him, landing his debut release back in 2014 on Moodymann’s prestigious label Mahogani Music, with no Detroit heritage. This has been followed with numerous self released records on his label Shake, and this year on Lumberjacks in Hell. Outside of this, Dan has launched a 12” edit series, Shake Tapes, gaining support from respected selectors such as Antal, Mafalda and Gilles Peterson. 2017 has seen him truly grow to international prominence, with numerous gigs as far afield as Japan and Australia, closing the main stage at Dimensions Festival and playing B2B shows with Jeremy Underground, Marcellus Pittman, Alexander Nut & Jamie 3:26 to name a few.

DJ M3
Manny staked his everlasting claim in the Bay Area music community in 1990 as a key promoter and DJ, roles for which he took on the abbreviated appellation of M3, short for “Makes Me Move”. Begun as a fluid, down-tempo approach, M3 eventually evolved his sound to the expression of house and techno bangers he is known for today. Manny quickly developed his own legendary party brand Green Gorilla Lounge and progressed to sharing the decks with industry icons with bookings across the globe. This further developed Manny’s acumen for rhythm and cultural finesse, priming him for several collaborations with Phil ‘Rene’ Collis of Bachelor’s of Science and setting the stage for their alliance as the stealthy duo Sleight of Hands. Having seen releases through his own label Green Gorilla Lounge, as well as Smoke ’N’ Mirrors, Om, Sirenum, and Chillin’ Records. M3 has notably performed at the San Francisco Treasure Island Music Festival 2014, Outsidelands 2013, and Coachella 2013 as Sleight of Hands.