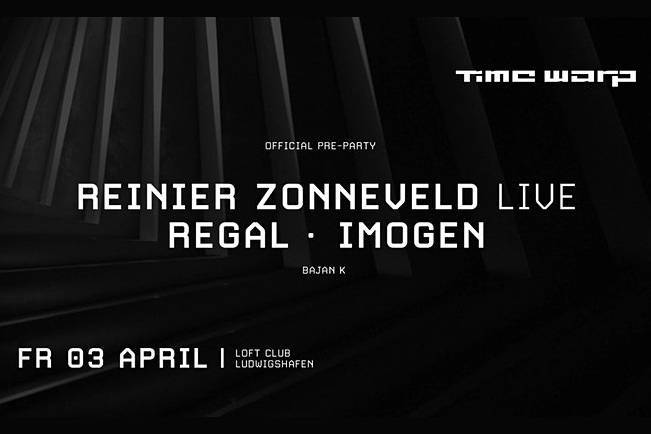 For our Time Warp 26th edition pre-party at Loft we are excited to welcome Reinier Zonneveld live, Regal and IMOGEN! In the mid-90s, Techno - the soundtrack of a scene - had become music for the masses. But in Ludwigshafen, two guys still dreamt of the magic of those first years, wanting to put on a party which would revive the spirit of the good old days. In 1994, Time Warp was born. With stellar performances by cult artists of the likes of Robert Armani, John Aquaviva and Speedy J, Time Warp set out to change the face of electronic music events in Germany. Over 20 years later and after countless editions, Time Warp still captures the sound of the underground. Taking place in late-March or early April, Time Warp is one of the main events kicking off the summer festival season. Acclaimed for its stellar line-up, supreme sound, luster visuals and enigmatic location, Time Warp captures the spirit of the golden days of Techno underground events like no other. As one of the biggest and longest-running techno spectacles in the world, Time Warp is a yearly hotspot for thousands of party people making their annual pilgrimage to Mannheim - the festival's home base since 1995. Over the past two decades, Time Warp has grown from a local highlight to an international behemoth, with several international editions in cities like New York, Utrecht and Milan.

REINIER ZONNEVELD
Previously composing classical music pieces and subsequently teaching himself his electronic production skills, Reinier Zonneveld is an outstanding talent who, despite his young age, is one of the most supported techno producers at the moment. His musical talent especially stands out during his live performances, where he creates new bangers and recreates his old hits on the spot, resulting in a unique set every single time. Pounding warehouse techno conducted live - we are excited to connect with Reinier.

REGAL
Gabriel Cassina, better known as Regal, rapidly shot to the forefront of the techno spectrum, after releasing productions met with widespread critical acclaim by the worldwide Techno scene. His own label Involve Records, founded back in 2012, has also become a core hub for both his solo productions and stand out collaborations with the likes of Alien Rain and Amelie Lens, whilst also welcoming artists such as Boston 168, FJAAK, Cosmin TRG, Bambounou, Z.I.P.P.O, Truncate and Fabrizio Rat to the imprint to date.