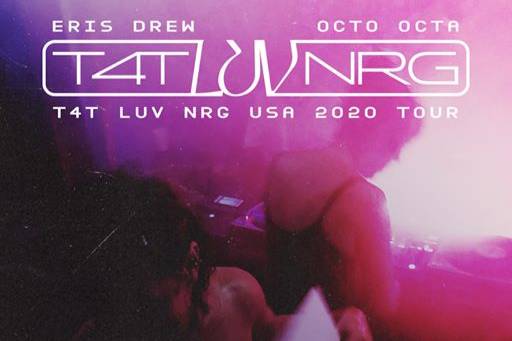 OCTO OCTA
It shouldn't be surprising that Brooklyn-based producer Octo Octa had already logged tireless years as a fringe IDM artist and sound designer before her debut EP Let Me See You lasso'd a mighty wave of international house-heads to the dance-floor and helped push underground house label 100% Silk onto everyone's radar in 2011.

DJ ERIS DREW
Eris Drew is a DJ, producer and trans ecstatic from the prairies of Illinois, USA. She is a recording artist on Naive Records out of Portugal and conducts the Psychedelic Rites of the Motherbeat at various locations, including Pittsburgh's Hot Mass and TUF in Seattle. Eris is a long-time resident at Chicago's Smart Bar, plays b2b sets with her partner Octo Octa, and is a DJ for the Bunker NY. She gives talks around the world on rave history and shamanism. In addition, Eris is an advocate for her people and mentors aspiring DJs and electronic musicians. The Motherbeat was first beheld by Eris following a rave in 1994. She has helped Eris to heal, create art and find her friends for over 23 years. Motherbeat is a fundamental primordial pulsation an archaic goddess at the gateway of the Mystery.