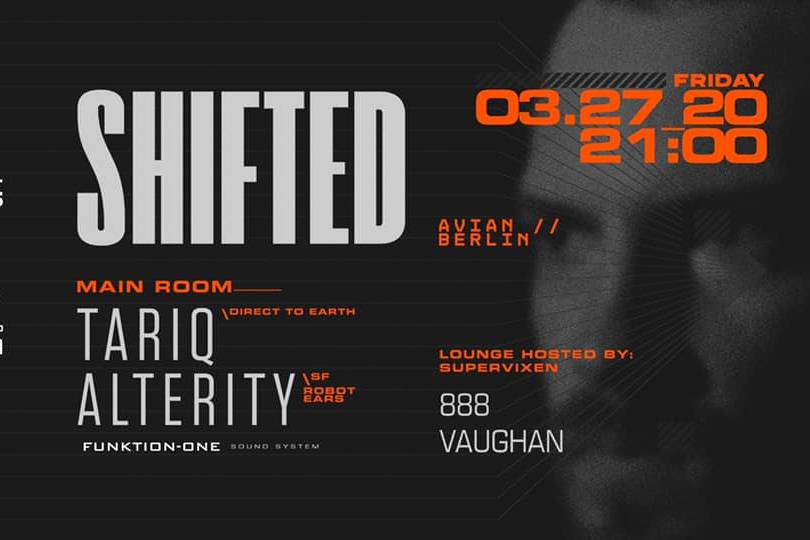 2 of SF's most consistent techno crews Robot Ears + Direct to Earth join forces once again to bring back the hypnotic sounds of Shifted to F8's intimate dance floor on March 27th, 2020. Main room reinforced with Funktion-One sound & Supervixen takeover in the lounge! Consent & safety are key at our parties. If you or anyone is made to feel uncomfortable during the night for any reason, please find one of the promoters or staff members at F8 and we will be more than happy to assist you.

SHIFTED
To understand Guy Brewer's creative output is perhaps more of a perceptive outlook onto the surroundings that have harnessed and fertilized such a mutable yield - a progressive change that is at all times moving forward in its' impulsivity and temperament. In that dynamic of change is the very constant that has defined the diverse artistic range in sound artistry that Brewer has come to master in his own right. After the dissolution of his esteemed group Commix, Brewer uprooted his UK drum n bass beginnings and transplanted himself to Berlin, where reinvention and transformation is of second nature to its' inhabitants that restlessly seek and speak through artistic language. The project Shifted began to take form in this realm of new possibility, an anonymous figure allowing shape amidst a new-found blank slate of sound. As much as this tabula rasa was cultivating a profound dexterity within the genres of techno, inherent know-how inevitably surfaced as nature does usually so influence nurture, and Brewer's compositional command came back to positively haunt him in no time.