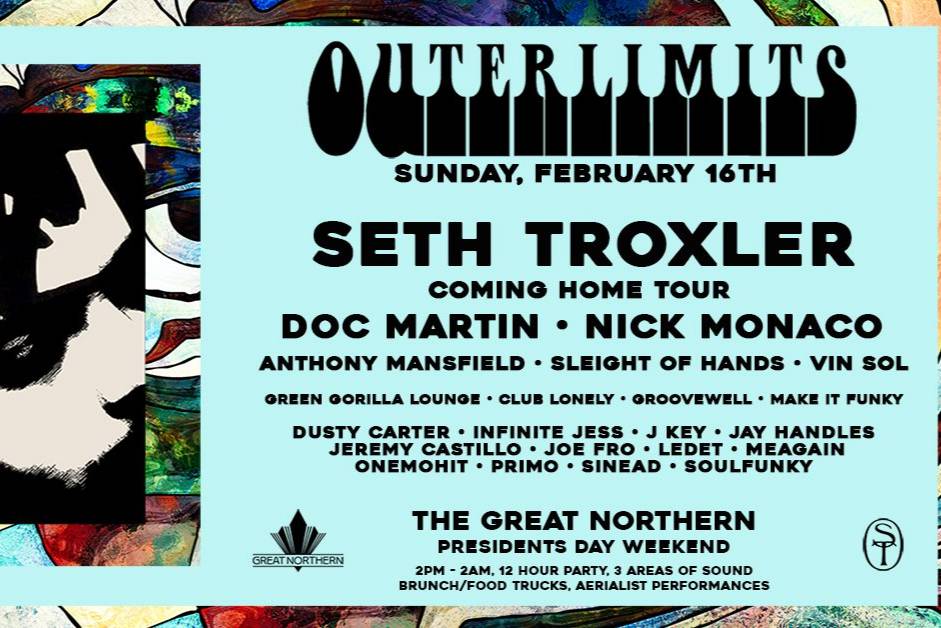 We happen to loooove Bank Holidays. Cuz this means we get one more day out of the week to move our bodies to the world's best dance music without having to wake up and drag ourselves to work the next day.' That’s right, friends. Outerlimits is making another triumphant return to The Great Northern on Sunday, February 16th and we’re spending the day dancing to a proper lineup of incredible tunes. We are beyond thrilled to welcome the legendary Seth Troxler to the decks for an extended 4-hour set as a part of his Coming Home tour.

SETH TROXLER
Seth Troxler is one of electronic music’s most instantly recognisable characters, as widely regarded for his encyclopaedic knowledge of early Chicago house and minimal techno through to obscure indierock and ambient psychedelia, as he is as a cultural commentator, art curator, restaurateur and entrepreneur. Descended from a family of cowboys and Baptist preachers, he’s part African American, part Egyptian, part Cherokee Indian but while his heritage is all American his global outlook, and unique way of viewing the world through the prism of contemporary music culture, transcends his Mid-Western origins. Born in Kalamazoo, Michigan, and raised in suburban Detroit, Seth learnt the art of DJing initially from his stepfather and later working behind the counter in legendary Detroit record store ‘Melodies & Memories’. It wasn’t until he made the brave decision to seek new-beginnings in mid- 2000s Berlin that his DJ career really found its feet. Moving to Berlin fresh out of his teens, just as the minimal techno movement was kicking off, was the making of Seth and since then he hasn’t looked back.

DOC MARTIN
Doc Martin has earned the respect of many who are fanatic about his style of DJ’ ing. His style crosses over from all timeless genres providing his listeners a new outlook & ever growing futuristic, unique sound. He can always surprise you with a rare classic that crosses time zones and still hits the spot even now. You will always feel the warmth of the crowd around the decks watching him spin away as they dance. The variation in his style of music is endless. What makes him so different from the rest? A unique ability to spin everything from Deep House to his funky Tribal Bass lines mixed with threads of Acid which creates soundscapes that cross all barriers. His collection of rare & classic records can be heard at his gigs.