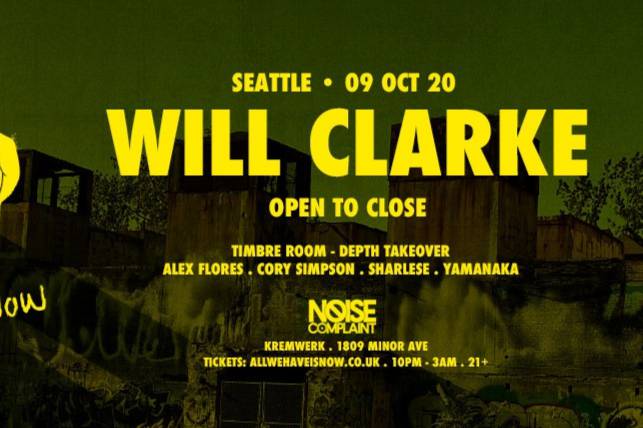 Noise Complaint hosts Will Clarke as he sets out to showcase his new record label All We Have Is Now with an open to close tour on Oct 9! Noise Complaint and the Kremwerk/Timbre Room Complex are proud to present, two rooms of thoughtfully curated music featuring: Will Clarke.

WILL CLARKE
An instantly recognizable DJ with his unique style and a one-of-a-kind beard, Will Clarke has solidified his place in dance music with hits like ‘Booty Percolatin’, ‘Techno (Not Techno)’ and recent remix of Adam Beyer’s ‘Your Mind’, as well as releasing on a number of prominent labels including Truesoul, Abode, Relief, Drumcode, Sola, among many others. Will’s impressive producer repertoire and distinctive sound of rollicking bass, low-slung funk and infectious hooks are all sounds that have caught the attention of industry top players Carl Cox, Adam Beyer, Jamie Jones, Maya Jane Coles, Patrick Topping, Camelphat, and Fisher. Nominated as the ‘Best Newcomer’ in 2016 for the annual DJ Awards in Ibiza, Will Clarke has additionally culminated two Billboard Dance chart #1s for his remixes of U2 and Rihanna. Having toured across Japan, South Africa, Australia, New Zealand and extensively in the US, Will Clarke has captivated audiences across the globe with his effortless performance style and flawless live sets. Refusing to let this infringe on his music making, he has released tracks on Abode, Relief, Drumcode and Truesoul already this year - the latter a frenetic two-tracker alongside fellow Bristolian Eli Brown and his first-ever melodic EP ‘Nothing Is Forever’. Closing out the year with two more EPs on We Are The Brave and TrueSoul, Will is gearing up to debut his own record label ‘All We Have Is Now’ in 2020. In support of the new project, Will Clarke is set to head out on a tour of exclusively open to close sets across North America. With hard work and raw talent in abundance, it’s clear that Will Clarke possesses the substance to match that eye-catching style..