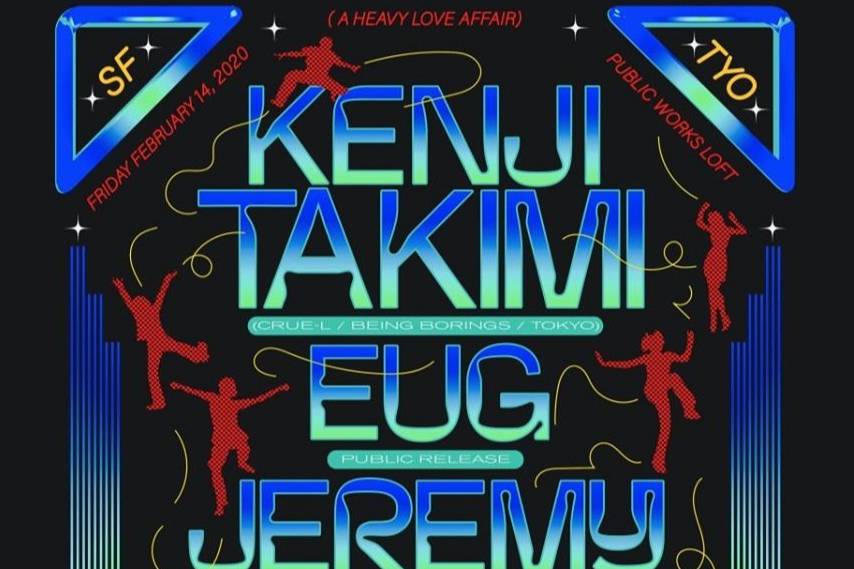 KENJI TAKIMI
Kenji Takimi has been an most important and prolific underground figure in Japan for decades, and one of the true pioneers of the left field disco/dance music worldwide as a DJ as well as a producer. Kenji’s DJ style is characterised by unmistakable romantic, spacey, and eclectic selection from his famously extensive record collection. His label Crue-L Records has been at the forefront of Japanese alternative music since its inception 28 years ago. From his remixes of Nina Kraviz, Cornelius,Hiroshi Fujiwara,Sebastien Tellier, Cut Copy, Phil Manzanera,Dimitri From Paris, Boris and countless more, to his studio work with dance favourites Theo Parrish, DJ Harvey and many more.

EUG
Under the unofficial tagline “A label for music, culture and home to degenerates”, San Francisco based independent record label Public Release Recordings was founded by Eugene “Eug” Whang in 2009. The label was launched as a platform for music produced by Eug’s immediate circle of friends, and although eight years on the scope is now unmistakably international, that sense of community remains. The discography, which by the end of 2019 will comprise of 21 releases, features more than 20 contributing artists including Soulwax, Tim Sweeney, Jacques Renault, Earth Boys, Mark E, Velvet Season & The Hearts of Gold, Eric Duncan and Force of Nature. There is no definitive sound attached to the label, but rather each release is carried out as a focussed individual project, receiving its own distinct direction and treated with the utmost care and attention to detail. A long time DJ, Eug took on the role of “party promoter” due to not finding the exact party he wanted to frequent. He would start the party FACE in 2007, aiming to bridge the gap between San Francisco’s bar and club scenes. After outgrowing its small dive bar origins, Eug moved the party into larger club venues where he has hosted notables such as DJ Harvey, James Murphy, Massive Attack, 2Many DJ’s, Jamie XX, Daniele Baldelli and many more.

JEREMY CASTILLO
Club Lonely resident, Soo Wavey familia, and all around house fiend, Jeremy Castillo plays house the way it's meant to be heard loud. With a nod to the classic midwestern house sound, the SF native beats up the dance floor with everything from classic to contemporary jacking house, NJ/NY garage, intimate italo disco vocal cuts, and hidden gems awaiting the right moment of the evening. Wherever he's at, you'll find him behind the decks dropping fog machine floor fillers for the heads, freaks, and everyone in between.