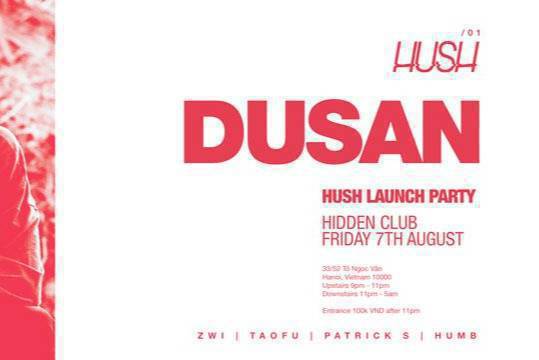 Patrick S & Jeffsy Jeff team up to launch HUSH, bringing their combined experiences to promote regular events in Hanoi. Armed with one of the best sound systems around (L Acoustics) & a deep knowledge of both the local & international scene, they hope to add another layer to Hanoi's dynamic music culture. Hush's mission is simple, passionate DJs playing epic showcase sets through the highest fidelity sound possible. For their very first event, they have invited Dusan Nikolic for an exclusive three hour set. Dusan Nikolic doesn't really need to be introduced anymore, having played many times in Hanoi's own Savage as well as many underground joints such as The Birdcage or The Lighthouse as well as large scale events and festivals in his home country of Serbia. Joining him on the lineup will be Zwi ( Duy Anh Le ), one of the city's finest selectors, TaoFu, Hanoi's new rising talent as well as Patrick S & Jeffsy Jeff aka Humb.