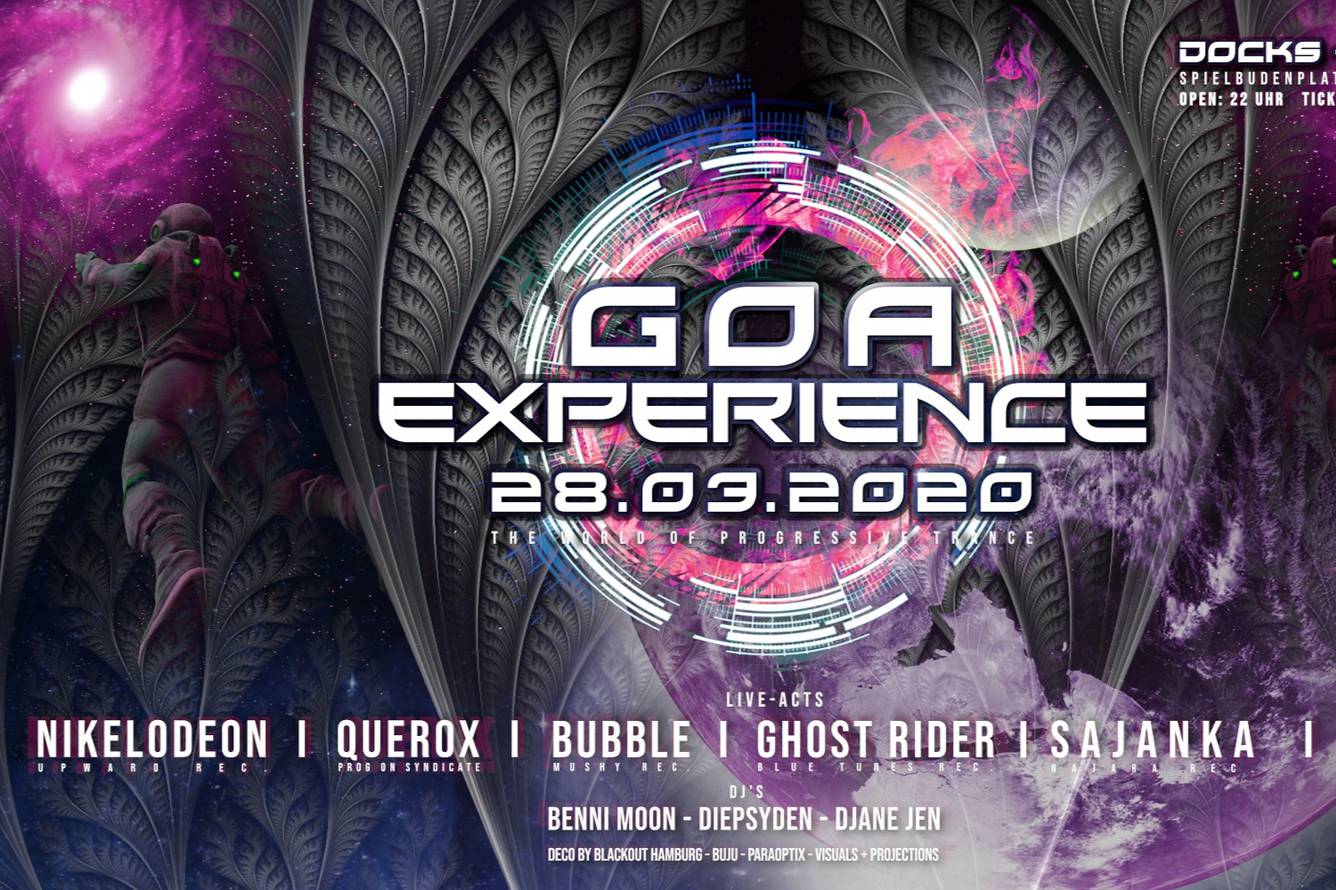 The GOA Experience becomes a meeting point for the progressive trance elite. That means: crunchy offbeats and fluffy melodies at their finest. Every now and then a fine drop of psychedelic is added. This time, too, we invited a number of extremely talented artists who should trigger that wonderfully foreign feeling in our heads and that wonderful rhythmic restlessness in our legs. The Hamburg Docks, probably one of the most legendary dance temples in the beautiful Hanseatic city, offers just the right setting for this: spacious, high ceilings, lots of small chill and seating options between the psy and progressive floors. With their decoration, Buju and Paraoptix ensure that it gets really colorful - and in between we fire an official full-color laser show to celebrate the day.

BUBBLE
The “Bubble” Project was created in 2004 by Karen Bagdasarov & Guy Sarnat as a consequence of their passion for electronic music and their rich musical knowledge. Karen, skilled since early childhood as a saxophonist & jazz musician, and later educated at the “Academy of Music and Arts” in Jerusalem, and Guy, who focused on electronic music production and the art of sound engineering at the “Muzik School” in Tel Aviv, combined their expertise to create a unique style of electronic music composition supported by energetic and powerful live performances. Within their three Albums, “Airless”, “Sound of Silence” & “Coldsun”, along with their 3 Eps, “Keep moving Forward”, “Drive” and “Bootleg”, Bubble has achieved just what they were working towards for all those years: merging rich melodies with this lush beats and a deep rolling bass forming the distinctive “Bubble Style”.

GHOST RIDER
Ghost Rider’s music aka Vlad Krivoshein feels like being sucked into a huge particle accelerator where elements from the worlds of Progressive Trance and Psytrance collide. Emitting high amounts of energy, they merge into something new, an enigmatic reaction that opens wormholes all over the dance floor. It's this innovative fusion of deeply hypnotic atmospheres and light, uplifting grooves that make Ghost Rider an instant success as can be seen with his first EP, which was released on Iboga Rec in 2012. Only one year later Ghost Rider was invited to perform his highly demanded debut album Complextro live, at major festivals all around the world. His performances encompass the most acclaimed dance parties in the world's including A State Of Trance , Universo Paralello , XXXPERIENCE , Airbeat One and many more. Vlad began producing music at the young age of 14, a factor that explains his outstanding technical precision. As can be seen from his background, it is no surprise that Ghost Rider is also one half of Class A, a project spearheads along with Ranji, Ghost Rider has collaborated with many acclaimed artists such as Neelix, Morten Granau, Phaxe and more. His music has been released on labels such as Iboga, Armada, Spin Twist, Blue Tunes and 432. His music is consistently played by major artists such as Vini Vici, Armin Van Buuren, Neelix and more.