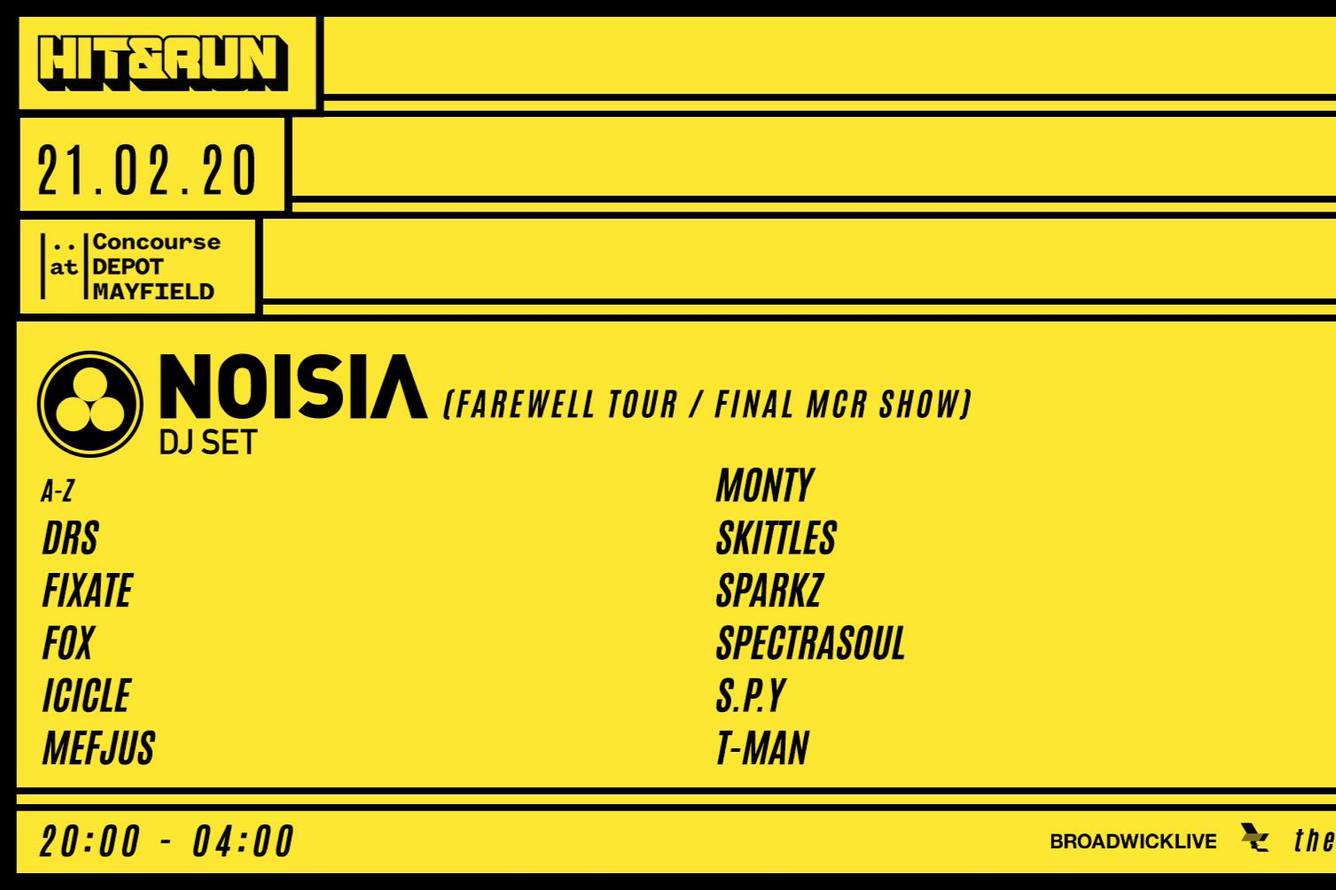 Hit & Run Concourse At Depot Mayfield, Delighted to announce the First Ever Hit & Run - UK at THE WAREHOUSE PROJECT! Have been wanting to book Noisia for years, delighted to have them for their Last Ever set in Manchester, having announced their impending retirement. Also, in keeping with our ethos, we have 100% Manchester talent on the mic, with nearly all of our World-famous Homegrown Vocal Talent hosting the sets on this show.

DJ FIXATE
Declan Curran, aka Fixate, comes from a generation that isn't locked to the notion genre, he is product of UK musical innovation with his sound pallet & productions traversing styles such as drum & bass, jungle, dubstep and grime. His debut release, ‘Pum Pum’ / ‘System Malfunction’ on Diffrent Music, immediately caught the ears of the great and good of the electronic music world with it’s discombobulating rhythmical patterns and clever fusion of multiple genres. Support came from DJ’s as diverse as Toddla T, Sam Binga, Alix Perez & dBridge amongst others, with the latter releasing two of his collaborations with Manchester’s Chimpo, ‘Bun It’ & ‘Dumb’, on Chimpo’s ‘Out An Bad’ EP a short while later. Following on from the success of these initial tracks, he was tasked with writing his first solo EP for dBridge’s hugely respected, taste-making label Exit Records. The ‘Throwback Therapy’ EP was released in May 2015 to much acclaim, with the 4 tracks demonstrating the wide ranging influences and artistic flair of their creator. He has since become a flagship artist for the label, with his follow up ‘March On’ EP and work as part of D&B supergroup ‘Richie Brains’ garnering praise from critics and fans alike. November 2017 sees the release of his biggest and most ambitious project to date, the 6 track mini LP ‘What Goes Around’. With 4 solo cuts as well as collaborations with Dismantle & Skeptical, it builds on everything that has come before and cements his reputation as one of the most exciting young talents in UK bass music today, whilst he continues to hone his already impressive skills as a DJ for both Exit and events across the UK and Europe.

ICICLE
Jeroen Snik – aka Icicle – is recognized as one of the most technically advanced and highly-respected producers in electronic music. After commanding the attention of the masses with releases on labels such as Hospital Records, Soul:R, Renegade Hardware and Critical, Icicle made the move from Holland to London in 2008 and has spent the last 6 years working with the Shogun Audio team. Following ground breaking singles including the rolling d&b of ‘Dreadnaught’ to the deep dubstep of ‘Xylophobia’ Icicle dropped his debut album ‘Under the Ice’ in 2011 that saw him reach new heights and cement his reputation as a flawless DJ and producer.